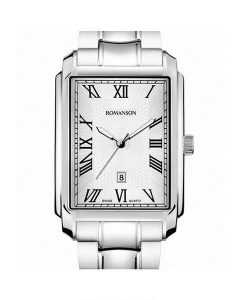 The brand “ROMANSON” has been generating and been in the production of some elegant designed both men’s and women’s wrist watches and is well-known brand due to it’s supreme quality providing amongst the timekeeping making world.

Many people think of Swiss household names such as Patek Philippe, Breguet and Vacheron Constantin when it comes to purchasing and thinking of the luxury wrist watches. There is now, however, a hidden champion competing with these Swiss brands on the global market. It is the Seoul-based wrist watch manufacturer Romanson.

Since its establishment in 1988, the watch brand has developed an array of watch models, complete with creative designs and world-class quality. The company’s name was inspired by the craftsmanship of Switzerland’s “mechanical city,” Romanshorn, the birthplace for many of the world’s leading watch brands.

Starting off with only the founder and two workers, Romanson has now grown into a global maker of timepieces that generates some USD 25 million in export sales every year, selling in more than 70 countries worldwide.

Behind the success of going global is the way in which a then 26-year-old watch maker has since focused on a global marketing strategy. In 1988, Kim Ki-moon, the founder, focused his efforts on the Middle Eastern market instead of targeting domestic customers, as on the back of its oil exports the Middle East was then rapidly growing into one of the world’s richest powerhouses. That strategy turned out to be prescient, as export sales figures hit USD 20 million in just a decade.

Kim believes that what has made the firm so successful in such a short period of time lies in the brand’s, “distinguished design, techniques, competitive price and quality.”

Romanson  has recently been achieving a remarkable growth through its worldwide sales network. We are successfully providing wrist watches under our own brand name which has trademark registration in world nations and is gaining recognition and reputation throughout the world. Romanson strives to attain the match of aesthetic character and functionality fitting perfectly with the corporate philosophy of pursuing beauty and convenience. 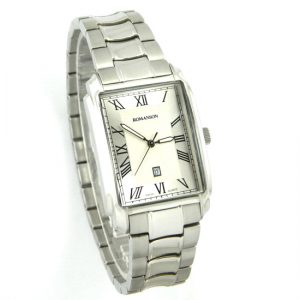 This absolute acoustic masterpiece of the Swiss made brand, ROMANSON now introduces an eye catching and the most elegant looking beautiful wrist watch for its customers as “ROMANSON TM8904”. This alluring timepiece is crafted with a glamouring and irresistible detailed textured silver color dial which amuses every eye contact which sees it through. Black color Roman numbers are used as for indicating timekeeping inside the dial with the minute lines as well for providing an absolute accurate timekeeping wherever you go. Same black color luminous handles are given as for complete and total precise indication of the time even in the dark. The date window is given above the number 6 in the dial with a silver color steel border which gives it a complete and a totally unique design as in showing the date. ROMANSON logo is given beneath the 12 Digit in the dial marked as in a silver color and written in as Black color matching with the Roman number indicators and with the black handle colors as well.

This ROMANSON TM8904 is crafted with a Sapphire Crystal Glass. Sapphire glass, is made synthetically and isn’t actually considered a glass but a crystal. The sapphire crystal is made in very high temperatures and it made up from crystalline aluminium oxides. These are then cut with diamond saws, grinded and polished to the finished “glass” product.

As when we comes to it’s bracelet design and material used, ROMANSON uses it’s fine art materials in it’s products manufacturing. It’s absolute acoustically designed stainless steel bracelet is given with both; matt and glossy finish to give this wrist watch an absolute stunning and classical look both at the very same time. There are Glossy and shiny links in the middle of the bracelet with a slightly curved shape which gives it away a very unique and alluring look among other wrist watches. The stainless steel is used as for long term durability and long lasting of this product. Same stainless steel material is utilised in the Butterfly clasp lock given in this wrist watch with the ROMANSON Logo imprinted on the back side of the lock of this wrist watch.