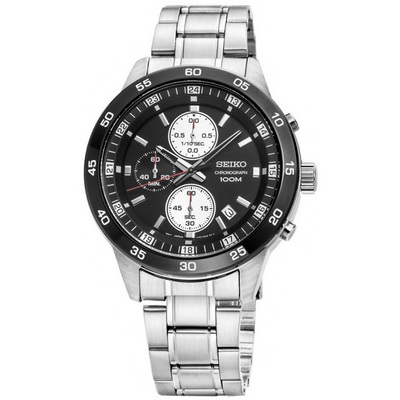 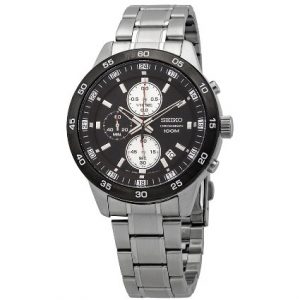 Wear a wrist watch from that imparts the same confidence to anything you wear. Black and steel makes for a striking combo that goes with any outfit of any shade for showing off your personality with delegate ness; for any time of the day and for any season. It easily qualifies as your go-to watch for every outdoor purpose at an appealing price point. Its timeless classic design which catches the attention of every seer signifies that this wrist watch is meant for use in the real life scenarios and doesn’t just give out an impression of being a work wear. 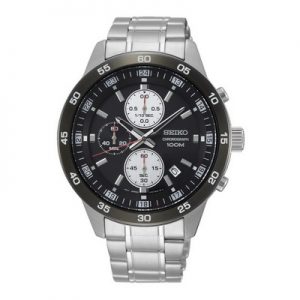 The history of Seiko brand is a 130-year story of the innovations. Since being established in 1881, the brand Seiko has contributed to society with one revolutionary product after another – starting with the production of Japan’s first wristwatch in 1913 and including the creation of the world’s first quartz watch in 1969. Today, Seiko’s technological expertise in micro-engineering, metallurgy and mechatronics has caused the company to expand into several diverse fields. Seiko has technologies which propels them forward in the wrist watch industry that other competitors would die to have.

Seiko Holdings Corporation A Japanese watchmaking company was founded in 1881, its founder was Kintaro Hattori. The production of watches began in 1913, but the first watch bearing the “Seiko” brand was produced by the company in 1924. The word ‘Seiko‘ in Japanese means precision that characterizes all products. Over the decades, the company has grown its business and has become one of the most respected and recognized watch manufacturers in the world. Over one hundred years of experience combined with modern technologies has been recognized by many wrist watch makers. Seiko received many prestigious awards. The most important of these was awarded in 1990 the Grand Prix de la Ville de Geneve watchmaking prize and in 2004 the prize of the world’s largest association of scientists working for advanced technologies IEEE Milestone for creating the “Quartz Astron” model. In addition, in 2008 Seiko won the “sports watch” category at the Grand Prix d’Horlogerie de Genève. It also received awards from prestigious magazines focused on watch topics such as English Watch Time, German Uhren-Magazin and Dutch Horloges Magazine. The brand not only accompanies the largest sporting events such as olympics, world championships in football or athletics, it is also present in culture. Seiko has created many popular collections such as: Seiko 5, Prospex, Velatura, Sportura, Astron and the legendary Grand Seiko. The company is constantly taking on new challenges and is not afraid to look to the future without forgetting about the rich past of it’s own as gaining so many milestones along the journey. Currently, the Japanese manufacture consists of three independent enterprises: Seiko Corporation (marketing and organization of watch sales), Seiko Instruments (production of watches and precision instruments)

As a renowned wrist watch maker, Seiko brand is known for its convenience technology and precision in the wrist watches like the caliber number 4T57. The Brand Seiko offers a great range of wrist watches from fashion and sport to technical timepieces styled in the most up-to-date designs among the market of the wrist watch makers. Seiko today produces a range of accurate, stylish wrist watches for every occasion, maintaining the original reputation for excellence and reliability for men and women. In fact, the accuracy of the brand Seiko has led to the brand being the official timekeepers for even various professional sports events. 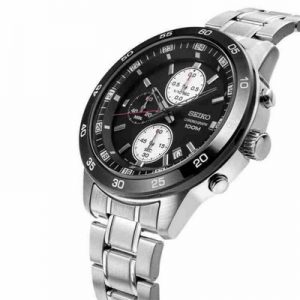 SEIKO SKS647P1 Chronograph is a men’s wrist watch that is equipped with an extremely precise quartz movement in it’s machinery.Chronograph – three sub-dials displaying: 60 second, 60 minute and 1/10th of a second. A hardlex mineral slide has been applied to the dial, it is softer than sapphire, but has much greater elasticity. The SKS647P1 model has a water resistance of 10 ATM, which allows you to swim freely without having to remove the timer. The envelope, 43.00 mm in diameter and 11.00 mm thick, is made of hypoallergenic stainless steel, which is corrosion resistant. A practical feature of the Seiko watch is the date display showing the current day of the month. Silver, readable indexes are placed on the black dial. It looks transparent and attractive. The whole is complemented by a silver steel bracelet, thanks to high quality materials it does not cause abrasions and allergies. The SKS647P1 watch is a men’s wrist watch from the SEIKO collection, intended for people who value above all reliability and unusual design.